A downloadable game for Windows and macOS

Downtown, present day. Step into the haunted skyscrapers and brave your way to the top.

Ghost City Rising is a spooky first-person roguelite where the furniture in the buildings you explore come to life to haunt you. Explore the skyscrapers of Downtown, each with a unique floor plan. Battle the ghosts in up-close-and-personal combat. Hit hard and stay on your feet and use the props around you to create diversions.

Ghost City Rising is still in early development. Any feedback or ideas are welcome!

R.I.P this game, it had potential and could've been a really fun game. :(

Definitely looking forward to paying money for this.

What are the portals for?

nothing right now, but they're meant to teleport you and/or level you up and stuff

Well that was a fun 10 minute of my time.Even though the combat is simple,it still had some strategic feel to it.Attacking slows you down so you have to time your dodge,its almost felt like dark souls but then you realized the enemy does jackshit for damage.

The throwing weapon are kinda useless considering you could destroy any ghosted furniture with a few swing from ye mighty pipe(or katana but we talk about weapons later).Instead,why not make the fridge immune to attack but when you throw something at it,it will reveal a weak spot.Or maybe some furniture have shield that can only be destroyed with throwing weapon.

Lastly,can you make a hud where it shows how much your weapons deal damage?I mean its not necessary and i'm not forcing you to include any of the thing i said it is simply my opinion but i thought that my pipe deals more damage than the baseball bat.

As i said before,this is simply my opinion with this game.Good luck on expanding the idea of this games Jeans :).

Thank you so much for your input! I've been tweaking the combat system quite a bit since this build, adding a bit of stamina and other things like health meters for example. Also you're correct in that the difficulty needs tweaking so that you are more dependant on using the throw weapons. Thanks again! Glad you liked it

I cannot pick up stuff, open doors, or any other thing that has to do with the E key. But it is extremely fun. Itès just annoying to restart when there is no more staircase. Is there any way you can fix this?

Hmm that's weird! Have you tried remapping the key in the input settings, before the game starts? That's the quick fix I can think of now. I'm looking into making the input system better.

thank you! that helped a lot!

Thank you! that helped a lot! Again, great game.

This game is perfect.

When I start the game,the house is disappear?

Sorry for your inconvenience. One thing that may cause this is that the game files need to be installed and run in a folder where it has writing rights as the house is currently saved to disk when its generated. I've experienced this myself on Windows but resolved it by moving the game to another folder. Does this work for you?

im gonna get this just because of your video

i have a suggestion. what if, instead of making the eyes dissapear, you make them fly to another object and posses it whn you dont pick up the eyes in time? and the eyes dissapear like they do now if there are no objects left.

thank you for your time

Hi! That's a pretty good idea! I might test that out. Thank you!

Join poor Johnny on the eve of his revenge.

This was really funny, seems I have things to fix! Keep it up :)

Thanks for the game! Really love the concept and you've pulled off the execution too.

There's not really anything major to fix though and that's the important thing. Keep up the good work! :D

I would love to see more weapons and items added in the future.

Very silly and fun, and just creepy enough for me to handle :P

Here's a preview of gameplay!

Thank you! I'm not too fond of horror games myself if they're too scary, so I've tried to get that spookiness in more as a flavor. Anyway, it's always interesting seeing people playing the game, glad you enjoyed it

Hey how do I look around with a gamepad, or how do I change those settings? I can't seem to figure that out and it isn't working for me right now. I'm unsure as to why.

Hello, thanks for reporting this. The gamepad input configuring isn't super intuitive right now, and the look parameters had fallen out. But I've uploaded a new build (0.1.1) where they've been re-added. They're called Look X and Y. Hope this works out!

Okay, thank you very much for your help!

let me start off with great game love the concept. Only thing I'm seeing as a i play is when i find a melee weapon to keep and use the name always ends in clone.

Other then that theres sometimes the photos on the wall that are possessed sometimes have a little z clipping action with the wall other then then those two things its a great sound game for it to be in alpha. keep it up

Hi! Glad you like it, it means a lot! And thanks for the reports. 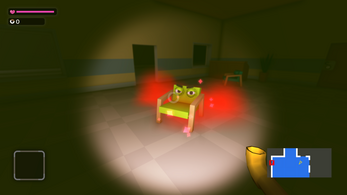 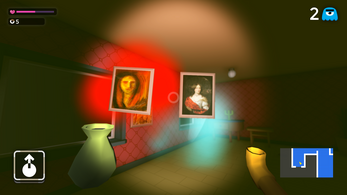 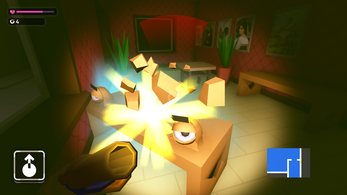 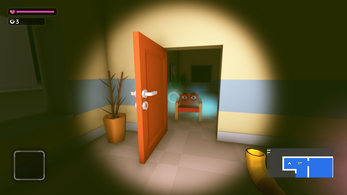